This exploratory mapping enables us to visualize the places of the market for paintings in Paris at the end of the 18th century. The art trade is at a turning point then : Paris, which concentrated the important auction sales in the middle of the 18th c., hands over to London during the revolutionary and napoleonian era.

The two maps picturing the Parisian art market in 1776 and 1803 show how the location of trade matches well-established artistic areas, grouping around artistic institutions (the Académie Royale, the Académie de Saint Luc) and traditional areas of trade (Pont Neuf and the quays), further attracted by the proximity of the Faubourg Saint Martin, concentrating the buyers’ mansions.

Though not deeply altering the art market geography, revolutionary events will trigger the grouping and concentration of the art market within a triangle defined by the Saint Denis street in the East, and which vertex would be the Place de la Concorde (ex Place Louis XV). Such geographical concentration of dealers and hôtels de vente (auction rooms) is probably due to the intertwining of kinship, economic (through the use of credit) and business relationships between dealers.

Inquiry is based on the study of two almanacs providing the names and addresses of the dealers : the Almanach historique et raisonné by Jean-Baptiste Lebrun (1776-1777) and the Almanach des beaux-arts (1803). Due to urban changes, we used two different base maps (Esnaults et Rapilly, 1787 and Esnauts et Rapilly, 1801). We also wanted to reconstruct — yet again, in an exploratory way — the visual environment of the Paris of art markets. Thus other sources were used to illustrate the application: dealers business cards (Waddesdon Manor collection) ; auction catalogues frontpages ; views of auction rooms and pictures of the Louvre area). 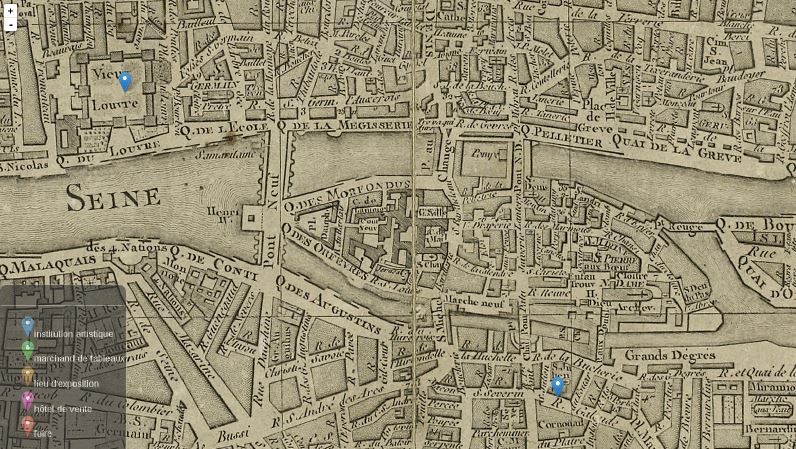