Mapping the agents of the art market in Europe

The database will provide the community of researchers with new documentation, in form and substance, on the agents of the art markets. During this first phase, we decided to narrow the database to the information gathered by the team participants as part of their own research. Hence it doesn’t pretend to be comprehensive and should be seen as the starting point for an experimental venture to be furthered and improved in the future, and to which any researcher can contribute.

This database was devised so as to gather information on the identity, activities and social or professional relationships of individuals who played an active role in the trading of artworks and art objects during the Modern period, even when not mentioned as « art dealers » as such in the sources.

Its conception required refined methodological thinking over the notion of « agent », revealing the sheer difficulty of grasping the activity of a group both socially and professionaly diverse, and whose practices constantly evolved over time and space according to changing local and international realities.

The collected data takes account, as much as possible, of the diversity of the professional labelling of those agents, the type of transactions, the sales volume and the category of items handled. Such data is meant to analyze the evolution of the specialization and professionalization of the art dealer over a long period. We paid a particular attention to the localization and spatial mobility of those agents, in diachronic terms, and to the outreach of their kinship and professional relationships using prosopographic data.

Visualization: the diversity of this information, the crossings and complexe connections it entails led us to integrate it in the visualization project so as to ease its handling and interpretation. More specifically, the point is to give a better understanding of the mobility of the agents of the art market, together with their modes of collaborative and relational organization.

The geo-localisation of agents is coupled with links giving access to the metadata contained in the database entries. A mapping endowed with a georeferencing system (GIS) coupled with a timeline covering more than two centuries was devised in order to reveal crossed information that wouldn’t have been displayed in a synthetic fashion without those technologies.

This visualization project mostly wants to achieve two goals: one the one hand, to facilitate the study of business circuits, and on the other to define the nature and intensity of the links connecting agents in order to foreground the existence of social networks. 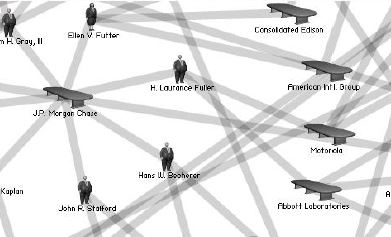