Using as a starting point more than 335 000 painting lots recorded in about 3 200 public auction catalogues, this application enables us to track the evolution of flows of paintings sold at public auctions in 64 European cities (in Germany, Belgium, France, Netherlands, Scandinavia). By activating the timeline view, one can compare this evolution over the course of the century, sorting the data by city, decade, or cumulated value.

Three cities stand out : Amsterdam, London and Paris amount together to 75% of the sales total, and 66% of the overall volume of paintings exchanged in Northern Europe.
For more than fifty years, until the end of the 1750s, Amsterdam remains prominent in public sales of pictures in Europe, while London stands second with half Amsterdam’s volume of sales, Paris lagging behind on the European level.

From the 1760s onwards, the pace of public sales steadily increases in all European cities, and suddenly the trend reverses : London emerges as the first European spot for the art trade, while Amsterdam now ranks number 3. As for Paris, its role will grow until it ranks second behind London.

What’s more, the visualization clearly shows the critical role played by German cities such as Hamburg and Frankfurt from the 1780s onwards. It also makes us ponder the concentration of sales in the Netherlandish area where in a rather small territory, the cities of the Hague, Middleburg, Leyden and Rotterdam did contribute — though not reaching up to Amsterdam’s levels — to the sustained market activity of the Republic of Holland. 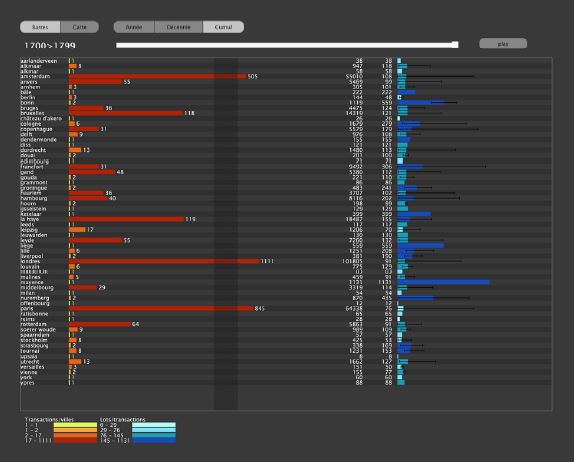